About 25KM from Amritsar is Tarn Taran. Tarn Taran was founded by the fifth Sikh Guru, Guru Arjun Dev who also built a Gurudwara there and named it after the town. The Gurudwara has the largest Sarovar (lake) among all the Sarovar's across all Gurudwaras. The place is calm, peaceful and a treat to the senses. I was there one winter morning and took some pictures. 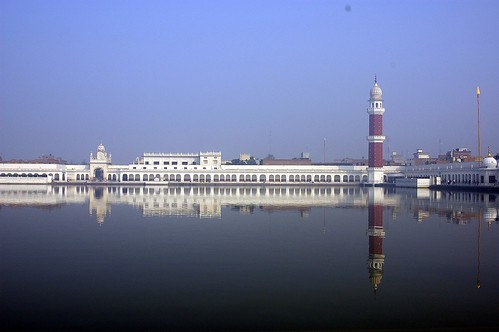 And a few more pictures from the Gurudwara:

I have been listening to music from the Laya project since a few days. It is a set of CDs I picked up from an interesting hippie-ish place called Psybabas on Castle street. Actually, one rarely gets to listen to such sounds. Ideas of similar music can be found scattered in the movies from the early 90s; Hai la sa reminds me of ETilOni sEpalanTa from donga donga. My favorite track though is LA ilAha ill-Allah which sounds very fresh and different from how one would expect it to be.

On a related noted, ETilOni sEpalanTa was composed by A. R. Rahman. I have great respect for the gentleman and recently H pointed me to an article in Tehelka titled The Mystic Master. While a lot has been written about him recently, mostly in the backdrop of The Golden Globe that he won, this article dwells on the person unlike probably anybody did before. Must read.

When I was in Chandigarh, I visited the Nek Chand rock garden. The place has a lot of art (mostly sculpture) built out of a large amount of household and other waste. The park has sections of arrays of similar sculptures of all kind. This rock garden was the pet project of one Mr. Nek Chand which city authorities discovered a few years after he starting it.

While most of the park is very interesting and beautiful, it looks like the authorities also expanded the original creations with quite a few things that Mr. Nek Chand certainly did not build himself. A few pictures:

I am proud to be officially a part of what is quite possibly the largest free software project on the planet. To all the people (few of you don't even use Debian - you know who you are) who have been motivating and helping me, and some that actually spent time working in past few days/weeks towards making this happen: hazaar thanks!

My parents found it strange that I spend considerable time in the night doing "some Linux thing", so the other day I explained to them what Free software is and we talked about copyright and licensing. I was very happy that they were able to appreciate it. I also gave a Debian Installer demo.

While there are a bunch of Indian languages supported in the Debian Installer, తెలుగు (Telugu) isn't one of them. They noticed it and motivated me to work on te_IN translation for d-i and promised to help me. So the three of us have been discussing translation strings. I have been committing changes slowly and intend to complete this activity in a few months.

Lack of interest in translation meant that I never gave much thought to it but I see that translating software is rather difficult and it is an activity that would benefit a lot from two or three people doing it together. I found a glossary at swecha.org but there are a bunch of problems

I am using these simple guidelines for translation:

A few resources that I have been using:

I will have to find a good quality comprehensive Telugu general knowledge book or an official A.P. govt. document to translate ISO 3166 codes etc. The Manorama yearbook would've been great, unfortunately Telugu is not one of the few languages it is published in. I will also bring my copy of Sankaranarayan's dictionary from my next month Hyderabad visit.

If you have suggestions on any of these (pointers to guidelines, resources that are DFSG free and I could copy from etc.) that would make doing this easy for me, please do let me know.

praveenkumarg, btw), and Naidu has promised to do some of the work as well as review. If all goes well, I will try and create a debian-10n-telugu sometime in the future.

This one derives inspiration from revealing errors site that Benjamin Mako Hill runs.

The kid in the picture was trying to use the Tata Indicom kiosk at Richmond Road (Bangalore) and suddenly a Windows start menu turned up on the screen. Sound and tested technology backing is what the kiosk reads in bold; well, if you insist!

I came across a news item in The Hindu business section written by a Corporate Reporter about BOSS GNU/Linux 3.0. The piece said that BOSS is a linux based operating system (OS) in 18 Indian languages, but the main features were described saying

The OS is endowed with Bluetooth for short range communications along with salient features such as RSS feed reader and PDF viewer to edit documents.

I would've expected better from The Hindu.

Then I hopped onto the BOSS Linux website, and even though it is a Debian derivative, Debian has not been acknowledged. The FAQs and a bunch of other documents have been copied directly from Debian without the copyright notices and the original authors have not been credited. Most changes were s/Debian/BOSS/g (with a few mistakes). What a shame, BOSS comes from CDAC and NRCFOSS, Govt. of India.

I suppose we could learn a thing or two from Bhutan.

Since the past few months I've been getting a lot of email at gmail.com not intended for me. Initially I thought it was spam but I realised that people have been inadvertently sending me mail thinking appaji is somebody else. So I get:

Obviously, I also get mail that sometimes says "I did not get your response". I've often tried responding explaining to the senders that I am not who they think I am, but there is no use. There is a LOT of personal or otherwise important information like addresses, phone numbers, financial transactions, passwords to some web-service accounts, domain transfer authorisation keys etc. in these emails. This makes me very uncomfortable.

I just got back from Indiana Jones and the Kingdom of the Crystal Skull, a movie in which Steven Spielberg takes his obsession with the extra terrestrial to the next level.

Please watch it if you feel that times goes too fast, the two hours that you are watching the movie will seem like two years.

Update: I should have kept the spoiler under lj-cut, but now that I think of it, that wouldn't help people aggregating the posts. I suppose I will avoid posting spoilers.

I knew better when I neither advertised nor used my IITG Alumni forwarding email address, and I suppose I'll not do that, ever.

For one, the ID given was ridiculous, connected to my name in a rather weird fashion with a number thrown into it and nobody bothered to reply when I asked if I could change it. And now the domain-name part of the email ID has been changed forcing people to tell all their contacts about the change, but this takes the cake -- the service has been moved to Hotmail with 2GB free space.

Huh! Thanks but no thanks.

I really disapprove of such widespread services (which should really not have a commercial angle to them) being taken over by the Googles, Ciscos and the Microsofts of the world.
Collapse